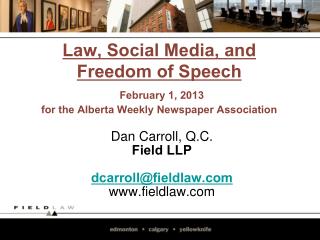 Law, Social Media, and Freedom of Speech February 1, 2013 for the Alberta Weekly Newspaper Association. Dan Carroll, Q.C. Field LLP dcarroll@fieldlaw.com www.fieldlaw.com. Disclaimer. This presentation is intended for general educational purposes only and is not legal advice. FREEDOM OF EXPRESSION, SPEECH AND MEDIA - . how the world views these rights. the history of human communication.

Chapter 1:Freedom of Speech - . the brody witch project: kristy, craig, sarah, and shannon. should speech be

The freedom of speech - . grayned v. city of

Freedom of Speech - . introductory comments. does “no law” really mean “no law?” no : according to the court,

Freedom of Speech - Is a wonderful approach administrated by adtivism for the public. you can express your opinions to

Freedom of Speech - . what type of speech is protected and what kind is not protected?. types of speech. pure speech