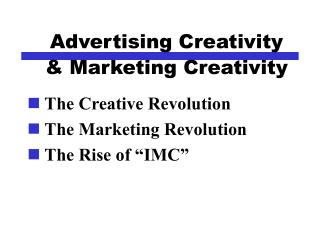 Championing Creativity - . in the classroom and curriculum. presenters and contact info in alphabetical order. i ntroduct

INNOVATION AND CREATIVITY: RESPONDING TO MARKET TRENDS ADVENTURE TOURISM CONFERENCE FEBRUARY 2012 - . … the job to be

CHAPTER 9 INTELLIGENCE AND CREATIVITY - . learning objectives. what is the psychometric approach to intelligence, and how

Creativity in VE - . no. yes. implementation follow up. information. function analysis. presentation. the phases of the