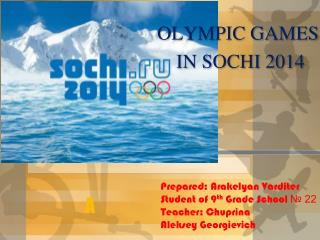 A. OLYMPIC GAMES IN SOCHI 2 014. Prepared: Arakelyan Varditer Student of 9 th Grade School № 22 Teacher: Chuprina Aleksey Georgievich. The Olympic oath. " On behalf of all the competitors I promise that We will take part in these Olympic Games ,

T he Olympic games in Sochi - . made petrushkov valery pupil of the 10th form middle school&quot; №2. symbols of

The winter olympic games sochi 2014 - . history of the olympic g

Presentation “ T he Olympic Games in Sochi” - . performed by a student of 10 « b » class gvozdev maxim. facts from