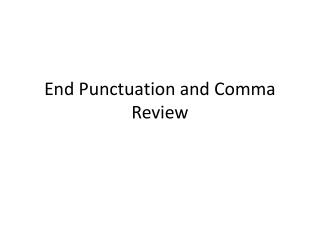 Comma and Punctuation Review Exercises - . the comma. to separate the elements in a list of three or more items. the

Punctuation: The Comma - . section 42.8. the comma. is extremely important! it can save lives! no really, look: let’s

Punctuation: The Comma - . rules:. use a comma to separate the elements in a series (three or more things) use a comma

End Punctuation - . an end mark is used at the end of a sentence . . question marks? . if a sentence asks a question,

Comma Review - . choose the sentence that uses commas correctly. michi will you read the haiku you wrote? a. michi, will

Comma Review - . use commas to separate items in a list of three or more. rem ember that an “item” may refer to a

End Marks/ Punctuation - . period. use a period to end - a declarative sentence (roosevelt was president of the united

Comma Review - . hanning. rule 1 – compound sentences. use either a semicolon or a conjunction with a comma to combine

Punctuation Review - . mrs. smith 7 th grade english. periods and commas. the period occurs at the end of most sentences.

Punctuation Review - . rules of grammar. rules for periods. use a period at the end of a complete sentence. use

PUNCTUATION REVIEW - . october 7, 2009. directions. each person in our class will receive a card. there will be a

Punctuation Review - . colon use to introduce a list but not if the list follows a verb or preposition use between the