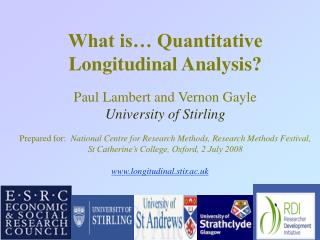 Concepts and Measures: Empirical Evidence on the interpretation of ESeC and other occupation-based social classificatio

Training opportunities – What do I need? And where can I get it? - . vernon gayle www.longitudinal.stir.ac.uk.

How useful are microclasses ? - . an analysis of detailed parental occupational differences and their effects on filial

Cross-national data in DAMES and GE*DE - . paul lambert, university of stirling prepared for the workshop on

Vernon Gayle Professor of Sociology School of Applied Social Science University of Stirling - . - a summary of your