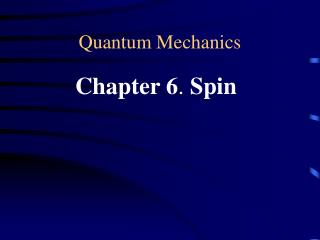 Quantum Mechanics. Chapter 6 . Spin. §6.1 The Spin Operators. Following the method of Section 2.3, we represent the eigenstates of the spin operator as two-dimensional vectors. In the case of electron spin, there are only two eigenfunctions instead of three or more. Chapter 1 The Science of Physics - . which of the following is an area of physics that studies motion and its causes? a.