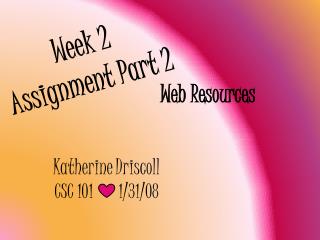 Assignment Week 2 - : "prepare a project in your daw using the project checklist from the material as your

Lecture week 2 – part 2 - . the development of the regime and anti-jewish policy in the pre-war years opinions and

CIS 408 WEEK 6 ASSIGNMENT 2 THE WILD FRONTIER PART 2 - To download this course, visit this link or click on the link

Week 3 – Part 2 - Phonology. the following powerpoint is to be used as a guideline for the important vocabulary and

Week 2 – PART III - . post-hoc tests. post hoc tests. when we get a significant f test result in an anova test for a