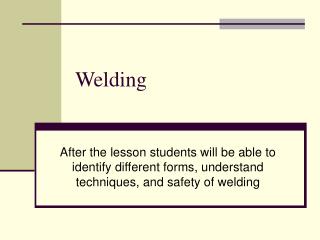 Welding. After the lesson students will be able to identify different forms, understand techniques, and safety of welding . What is it?. A fabrication or sculptural process that joins materials, usually metals, to become one. How is it done?. Welding - . module 10. objectives. after this module you should be able to identify the most common welding hazards take