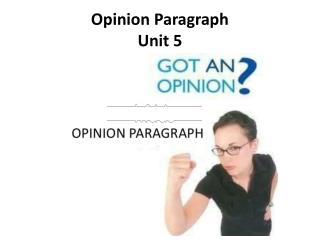 Opinion Paragraph Unit 5. Your are going to learn:. 1- Using reasons to support an opinion. 2- Using there is/there are to introduce facts. 3- Using because of and because to give reasons. Opinion Paragraph.

UNIT 3 - Back to the past. unit 3. creating an illustrated time chart. project. enjoy some cave paintings in dunhuang

Introductory Paragraph - . first impressions are so important. how many times have you heard that? it is true that the

Prologue - . 1 st paragraph: brief summary of the book this should not be cut and paste from a website or copied from the

How do you make sure your persuasive opinion essay is easy to read ? - . in this lesson you will learn how to organize

Back to Basic Writing - Mini unit: how to write a paragraph. back to basic writing. day 1: what is a paragraph? what does

What is a Paragraph? - . a paragraph is a group of sentences that tells about one subject or area. each sentence in a

How to write an opening paragraph - . first impressions are so important. how many times have you heard that? it is true

Creating a Persuasive Paragraph - . in a persuasive paragraph, you state your position in the topic sentence . the body

Write Paragraph - . a. effective paragraphs when we start to write, we must pay attention to three elements: unity,

Analysis and Paraphrase, “Returning to Southie” - . topic: discuss the conflicting emotions of each author toward his

How to Write an Opinion Essay - . you have learned the 5 part essay, now we will learn how to apply this to an opinion