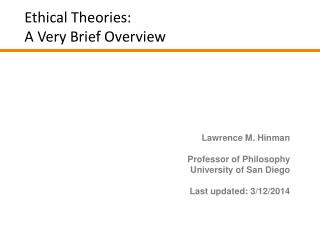 Selling (A VERY brief overview) - . prospecting &amp; the law of numbers. there are nearly 7 billion people on the

Literary Theories in very brief summary - . formalist theory. nothing outside of the text independent no outside

Ethical Theories - . what is ethics? a few years ago, i asked the smartest people i knew in law school….

ETHICAL THEORIES - . ethics = inquiry into the nature of morality, codes and principles of moral action. morality =

Ethical Theories - Understanding ethics through culture: an overreview of ethical theories and values (adapted from dr.