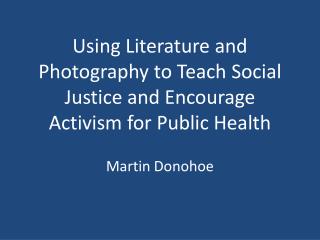 Pre-AP Strategies in Social Studies - . using visual materials rigor for all. welcome!!!. please sign in…. after

CC200 Youth Justice - . the rise and fall of delinquency chapter one. the public issue. over the last twenty years, youth

Photography - . the word photography comes from greek words meaning to write or draw with light. . photography is a

What is public health informatics and what can it do for my local health department? - . date:    thursday, april 30,

“Is Photography Art?” - . “is photography art?”. we must 1 st gain a clear definition for 3 important questions!