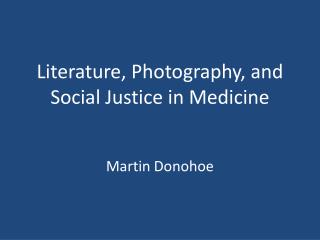 Literature, Photography, and Social Justice in Medicine. Martin Donohoe. Am I Stoned?. A 1999 Utah anti-drug pamphlet warns: “Danger signs that your child may be smoking marijuana include excessive preoccupation with social causes, race relations, and environmental issues”. Outline. Literature, Photography, and Social Justice in Medicine - . martin donohoe. am i stoned?. a 1999 utah anti-drug

Using Literature to Teach Social Justice and Activism - William butler yeats. education is not filling a bucket, but

Social justice and social sin - . social justice. an ideal condition in which all members of a society have the same

Social Justice and Social Change - . why should we even care?. what is social justice?. a concept born out of fairness

SOCIAL JUSTICE AND ACCESS TO JUSTICE - . objectives law programmes ought to “expose students to the impact that the

Social Justice - . in the poorest households in some low-income countries – up to 10% of income is spent on tobacco.

Social Justice - . by nathan . quotes about social justice from the popes about christ paraphrased. ‘charity will never

Social Justice! - . mandatory information. meetings will be every wednesday @lunch in the lecture hall . (if something

Social Justice - . senses of justice patterned vs. historical approach. justice. the most general meaning of justice is

Social Justice? - . are christians to be social? yes! lk.10:29- to live in companionship with others or in a community,