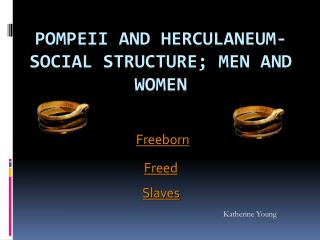 Pompeii and Herculaneum Economy: Industries and Occupations - . “there is bias in the creation of evidence and bias in

POMPEII HERCULANEUM THE URBAN PLAN - The urban plan. the typical roman city had more public places and a more obviously

Pompeii and Herculaneum - . shops and businesses. why look at these buildings?. it is important to study shops and

Pompeii – Public Buildings - . the position and layout of pompeii on the left side (west) is the forum with the temples

Pompeii and Herculaneum - . shops and businesses. why look at these buildings?. it is important to study shops and

The Chicago Tribune Pompeii, Italy - . escape from pompeii by juan carapia the chicago tribune it was a horrible tragedy

The influence of ancient Greece and Egypt in Pompeii and Herculaneum - . alison thompson.

Social Status: Pompeii and Herculaneum - . by lucy tierney. a young woman who appears to be educated .

Social Structure - . pompeii and herculaneum. the freeborn elite. dominated by a small number of families lived in

Pompeii - . the forum. map of the forum of pompeii. a - municipal offices b - basilica c - temple of apollo d - horrea e

The Dog of Pompeii - . vocabulary words. dwelling. shelter in which people live tito and bimbo looked longingly at the

The forum of pompeii and the national mall - . public spaces, ancient and modern. the forum in pompeii. the forum in

Pompeii - . by: chetan singh. what is pompeii? how was it