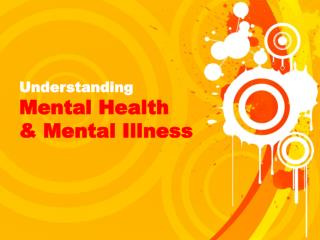 Mental Illness, Diagnosis, Prognosis and Treatment or - . “i don’t have a split personality and neither do i”.

Normality, Mental Health and Mental Illness - . its all in your head - literally. something to be aware of first!!.

The Interdependence of Mental Health and Physical Health - . the case for creating integrated systems of care. james yoe