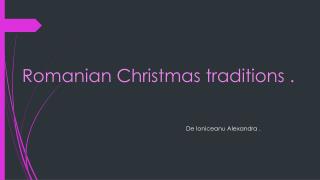 ROMANIAN WEDDING TRADITIONS - The wedding is the most interesting family custom of all. it is also a complex custom

Romanian funeral traditions - . product made for the project: intercultural dialogue as a means to develop creativity and

Romanian Christmas - . christmas time is celebreted by all christmas people around the world. it is a celebration of love

CHRISTMAS TRADITIONS - . written by:clive. at christmas eve in our country malta we leave mince pies and a glass of milk

Christmas Traditions - . the nativity. the scene of jesus, mary and joseph huddled in the stable is probably the most

Christmas traditions - . postovaru diana alexandra clasa a vi-a b. legend of the christmas

Christmas Traditions - . click here to begin. menu. menu. home. the first and most important is to decorate the christmas