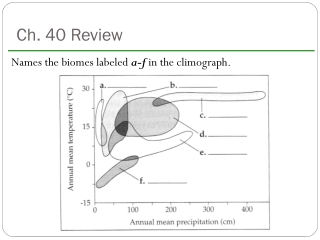 Ch. 40 Review. Names the biomes labeled a-f in the climograph. Ch. 39b Warm-Up. What is something that you can do that you have been able to do since birth? What is one behavior that you learned by watching someone else? List some ways that animals communicate. Define : Circadian rhythms Let's Review Ch. 39-40 - . name the 4 characteristics unique to chordates and what they evolve into in the subphylum

Ch. 40 - Amphibians - . amphibians are thought to have evolved from fish. why? fins into legs, gills into lungs, scales

Ch. 40 Insects - . most diverse and largest number of species of any class of organism. they were present on earth before

Ch 4 Review - . #1. the beatitudes are the very heart of jesus’ preaching, taking up the promises made to abraham and

CH 18 Review - . water in the atmosphere. if the specific humidity is 5 g/kg and the water vapor capacity is 10 g/kg, the

Ch. 14 Review - . climate. why would point a have the warmest climate?. the majority of the sun’s rays are absorbed at

Ch 14 Review - . use your whiteboard to answer the following questions about the causes of the civil war. topics for

Ch 6 review - . who was responsible for creating the first organization of the periodic table. moseley dalton mendeleev

ANIMAL BEHAVIOR - . behavior: what is it?. behavior: everything an animal does &amp; how it does it ethology: the