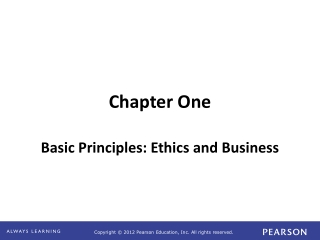 Chapter One. Basic Principles: Ethics and Business. Learning Objectives. After reading this chapter , you will be able to : 1. Identify reasons Why the study of ethics is important. 2. Explain the nature and the meaning of business ethics. Chapter One - . the foundations of american government. what is politics?. process of resolving conflicts and deciding,

Business Ethics - . what is ethics?. ethics is a collection of moral principles and rules of conduct accepted by part or