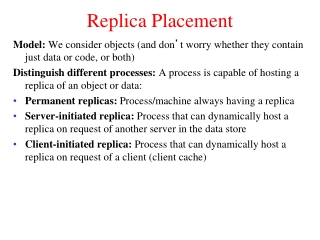 Replica Placement. Model: We consider objects (and don ’ t worry whether they contain just data or code, or both) Distinguish different processes: A process is capable of hosting a replica of an object or data: Permanent replicas: Process/machine always having a replica Replica Watch - The guidelines might coincide however the attributes you must choose from can make it complicated. visit

replica clothing - Are you afraid that you'll never look as good as a celebrity? you may want to rethink this. with some

Judiciary Replica - According to judicial status huge amount of judges are required in india. the judiciary is important