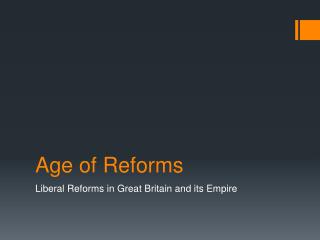 Age of Reforms. Liberal Reforms in Great Britain and its Empire. Reforms of the 1800’s. Liberals helped enact numerous reforms to protect individuals’ political and civil liberties. Reforms focused on: Suffrage : the rite to vote Correcting social and economic problems

Unit 2: Reform, Expansion, and War - . progressive reforms. if you were

What were the problems and issues that provoked religious reforms in Western Christianity? - What were the beliefs of

EXAMINATION REFORMS AND SCHOOL BASED COMPREHENSIVE EVALUATION - . why school based comprehensive evaluation. external

OVER VIEW OF PUBLIC FINANCE REFORMS IN ETHIOPIA - . (presented for the seminar on “strengthening budget practices in