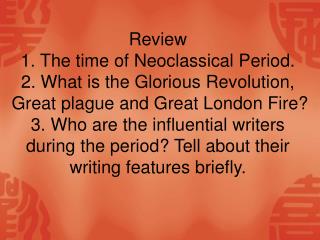 Review 1. The time of Neoclassical Period. 2. What is the Glorious Revolution, Great plague and Great London Fire? 3. Who are the influential writers during the period? Tell about their writing features briefly. Chapter 5 the 19 th century Romantic period. The Romantic Era (19 TH Century) - . romantic ≠ romantic (someone involved in romance) movement in not only music but

Romantic Idealism in 19 th Century Art Education - . a reaction to methods of mass public education in the common school.

The 19 th Century - . conditions that lead to the new growth revolutions cause colonizing monarchies to shrink the

The 19 th Century - Liberty leading the people by eugene delacroix. the 19 th century. (the first half) . 19 th

The 19 th Century - . from reaction to revolution, 1815-1850. peace settlement after napoleon: congress of vienna. met in

The Romantic Period - . the romantic period. refers to the years 1786-1832 in british literature stressed strong emotion,

The Romantic Period - . 1798-1832 “poetry is the spontaneous overflow of powerful feelings: it takes its origin from

The Romantic Period - 2. . . the romantic period in british literature was a time of:nature-inspired poetrypolitical