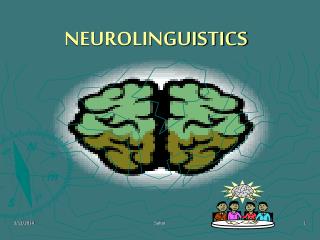 NEUROLINGUISTICS - The origin of grammatical rules is ascribed to an innate system in the human brain. the knowledge of

Neurolinguistics What do we want to achieve? - . włodzisław duch department of informatics, nicolaus copernicus

Looking for a ‘gold standard’ to measure language complexity : What psycholinguistics and neurolinguistics can (and