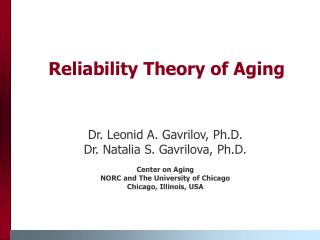 An Aging Population - . active planning for active aging. agenda. demographics who are the boomers new age in aging best

Aging and Reactive oxygen Species - . aging: what is it? . aging, has been termed generally as a progressive decline in

Evolution of Aging and Late Life - . chapter 18 experimental evolution. does aging have a purpose ? is it adaptive ?.

Software faults reliability - What is software reliability. the probability of failure-free software operation for a

Reliability and Item Response Modelling: Myths, Observations and Applications - Overview. what is reliability?does