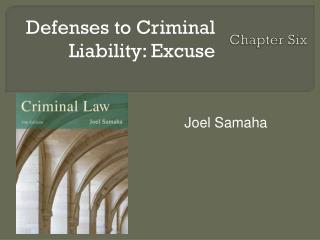 Chapter Six. Defenses to Criminal Liability: Excuse. Joel Samaha. Chapter Six Learning Objectives. Understand that defendants who plead an excuse defense admit what they did was wrong but argue that, under the circumstances, they were not responsible for their actions. Chapter Six: The Rise of the Biblical Tradition - . culture and values, 8 th ed. cunningham and reich and fichner-rathus.