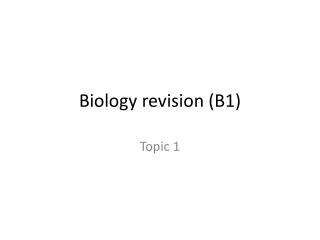 Biology revision (B1). Topic 1. There are millions of species on our planet. It would be difficult if we just tried to describe and name each one individually. Although species can be very different from each other, many of them have similar features that allow us to put them into groups. B1 C1 P1 REVISION QUIZ! - . b1 you and your genes. put these words in the correct order of their size from smallest to

B1 Revision – You and Your Genes - . you and your genes (b1) revision for exam. what makes us all

Biology Revision - . b6 beyond the microscope. 6a understanding bacteria. bacteria – smaller than animal or plant

Biology Revision - . b4 it ’ s a green world. 4a who planted that there?. plants carry out photosynthesis in leaves:.

Revision - . b1. what is dna?. they consist of long strands of a substance called deoxyribonucleic acid, or dna for

CARTOON REVISION FOR B1 EXAM - . there are 11 pictures stuck up in the corridor – can you find all 11 and answer the

The Missing Treasure - T. the missing treasure. i. times square, new york. i. the chrysler building. i. world trade

B1 Understanding Ourselves - . revision lessons does not contain all of the content for b1 – use checklists ..b1

Revision Notes For Class 11 Biology - Many students become bother due to the examination pressure. sometimes, they become