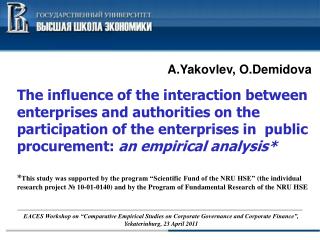 A . Yakovlev, O . Demidova. The influence of the interaction between enterprises and authorities on the participation of the enterprises in public procurement : an empirical analysis *. DEMIDOVA OLGA demidova@hse.ru - Evaluation of major political institutions by residents of the countries with economies