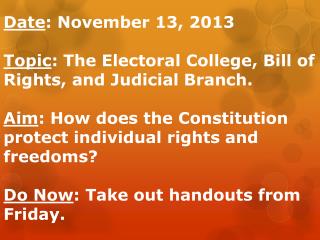 Date : November 13, 2013 Topic : The Electoral College, Bill of Rights, and Judicial Branch. Aim : How does the Constitution protect individual rights and freedoms? Do Now : Take out handouts from Friday. . differing opinions Opinions - . after i read the following statements, go stand next to the sign that expresses your viewpoint – either

OPINIONS - . how to say …. asking for an opinion what’s your opinion of/about … what do you think of … i’d

Opinions - . ap prompt. the prompt:. the

Les Opinions - . target: to create a poster which displays your opinions in french. things that you like….

International Opinions - . of a m e r i c

Divided Opinions - . john 7. who is this?. what do you think of jesus?. black. touched by an angel. and

Surveying Opinions - . in groups of three or less you will be conducting a survey to compare opinions of teens and adults

Writing Opinions - . lily granville tafe 2010. things to be aware of

Differing Viewpoints : Industrial Revolution - . the socio-economic spectrum from capitalism to communism. “a