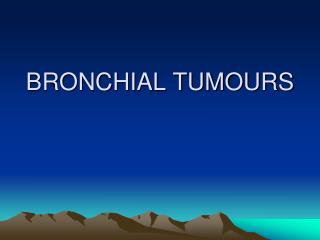 BRONCHIAL TUMOURS. Bronchial tumours , widely divided in to primary lung tumours and secondary or metastatic cancer. The majority of primary lung tumour is bronchial carcinoma, and It is one of the most common cancer world – wide, It causes 18% of all cancer death. BRONCHIAL ASTHMA - . introduction to primary care: a course of the center of post graduate studies i n fm. po box 27121

Bronchial Asthma - . chronic inflammatory disorder of the airway, which characterized by hyper-responsiveness, mucosal