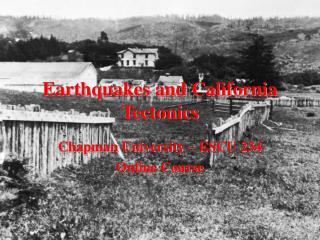 Earthquakes and California Tectonics. Chapman University – ESCU 234 Online Course. Lecture 1 – A Brief History of Earthquakes and Seismology. In the last 500 years, more than 7 million people have died from earthquakes and many more have seen their food sources and local economies destroyed Earthquakes and Tectonics - . the point on earth’s surface directly above the earthquakes focus. answer. epicenter.

California Earthquakes - . why an earthquake can cause so much destruction . http://

EARTHQUAKES IN CALIFORNIA - . california has had many earth quakes some were big and some were small. two of are the