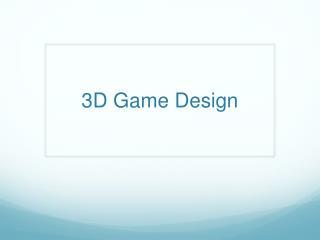 3D Game Design. Introduction. Up until now all of your work in this course has been two-dimensional. Images on a screen have been flat with only the width and height to be considered. Now you must consider the depth and the placement in space. Fixed 3D. 3D UDK Game - . exploration puzzle story. the island. the beacon five generators. you are a biomechanical