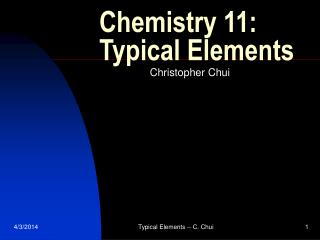 Chemistry 11: Typical Elements. Christopher Chui. Hydrogen. Members of a family or group tend to react similarly Hydrogen is usually considered as a family by itself A hydrogen atom can react to lose 1 electron H + Chemistry Notes - . atom – the building blocks of matter element – elements are made up of atoms. any substance that

Chemistry of Life - . chapter 2. an intro to chemistry. matter. substance that has mass and takes up space compose all

CHEMISTRY - . science 9. why study chemistry?. in this unit we will be studying atoms, elements and compounds brainstorm

Chemistry for Biology - . why study chemistry in biology? think about what you are made of. if we completely broke you

Unit 1 Atomic Structure and Nuclear Chemistry - . 4.1 - the elements a . an element is: b . elements can exist as pure

Elements of typical cross section of road - . road . a way or path over which cyclists, vehicles and pedestrians can pass

Chemistry - . elements. matter: anything that has mass and takes up space . matter is made up of substances called

The Chemistry of Life - . elements. only 90 naturally occurring elements and only 25 of those are essential to living

Coordination Chemistry - . transition elements: partly filed d or f shells. which elements should be considered as

Chemistry –Pure substances - . grade 9. elements. made up of one type of particle. periodic table. all elements are

Chemistry - . elements. an element is a substance that cannot be broken down into simpler substances by chemical means