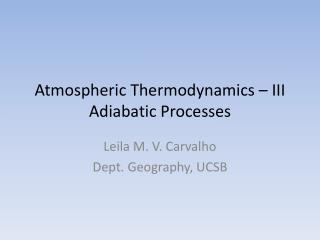 Atmospheric Thermodynamics – III Adiabatic Processes. Leila M. V. Carvalho Dept. Geography, UCSB. Review. We learned that there are processes that occur at constant pressure, others at constant volume (no work done or received)

Chapter 3 The Second and Third Laws of Thermodynamics - . ~we have seen in the last chapter that the first law of

Unit 4: Thermochemistry &amp; Thermodynamics - . that’s me!. okay…not really. …or is it?. why study