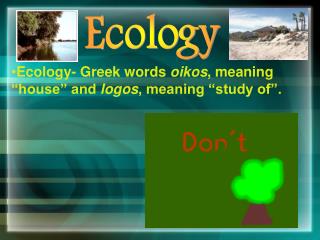 Ecology. Ecology- Greek words oikos , meaning “house” and logos , meaning “study of”. BIOSPHERE- broadest level of organization, thin volume of Earth and its atmosphere that supports life; all organisms found within this biosphere. What is Ecology? - . origin of the word…”ecology”. greek origin oikos = household logos = study of… study of the

Semantics - . meaning in language asian 401. semantics. the study of the systematic ways in which languages structure

Words and their meaning - . evangelisation: the process of announcing the good news the proclamation and enactment of the

Words have Power - . in the beginning was the word … john 1 : 1. sanskrit. the scottish play. language separates us

Grade 9 BIOLOGY - . sustainable ecosystems. ecology is the scientific study of the abundance and distribution of

Bibliographies - . prepared by: jane l. garay. what is a bibliography?. derived from two greek words, “ biblion ”

Semantics (from Greek &quot; σημαντικός &quot; - semantikos ) is the study of meaning . - Semantics

Morphemes: Structural Clues for Word Meaning - . morphemes. are the smallest unit s of meaning in english words. they are

Multiple Meaning Words - . multiple meaning words are words that have several meanings depending upon how they are used

Hey, what is Geology? - . geology is about more than just rocks. geology, from the greek words ge meaning rocks and logos

Ecology: Population Growth &amp; Regulation - . what is ecology?. from the greek meaning “a place to live”, it