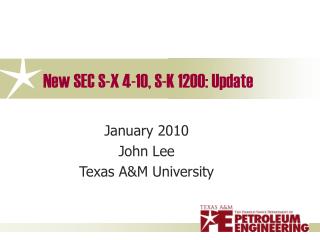 New SEC S-X 4-10, S-K 1200: Update. January 2010 John Lee Texas A&M University. Disclaimer. Opinions expressed in this presentation are mine alone; they represent the opinions of neither the Securities and Exchange Commission nor of its staff members. Where Are We in Rules Updating?.