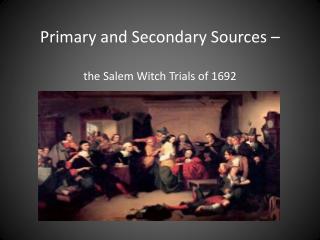 Primary and Secondary Sources – the Salem Witch Trials of 1692 Primary and Secondary Sources – the Salem Witch Trials of 1692. What are primary and secondary sources….

Primary and Secondary Sources – the Salem Witch Trials of 1692

Comprehending Primary Sources: Making text accessible to English Learners and ALL students - . one nation many faiths

The US Census and Secondary Data Sources - . secondary data. data that someone has collected, collated, or analyzed the

SOURCES OF SECONDARY DATA AND QUALITATIVE DATA ANALYSIS - . sources of internal and proprietary

HYDROCELE - . defined as a collection of fluid within the tunica vaginalis of the testis. cassification. 1. congenital 2.

Documenting Sources: Essentials of APA Format - . produced by: purdue university writing lab adapted for use by:

Acid Rain - . by: dominique gomez, elaina matsko, and teshia tucker. jeopardy . sources of no x and so x 500. the primary

“The Crucible, Salem Witch Trials, McCarthyism Quiz” - . directions. be sure to restate the question as part of your

Witch Torture - . bootikens. “one such item was the bootikens. these were boots that went from the person's ankles to