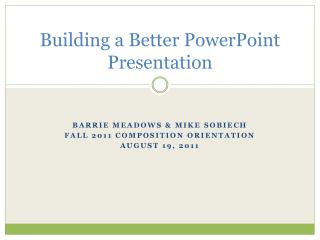 Building a Better Marriage - Fate of marriages. end in legal divorcesettle for emotional divorcegrow in love for a

A Microsoft Powerpoint Presentation - Frozen: my obsession and why others are obsessed. a microsoft powerpoint

Building a Better Podcast - . by carrie carpri. be prepared. organization is key requires a beginning, middle, and

Building a Better Sentence - . write a sentence using only an article (a, an, or the), a noun, an action verb, and the

Making a PowerPoint Presentation - . the most important thing to remember about developing a group powerpoint is that you

CREATING A POWERPOINT PRESENTATION - . using microsoft vista. on your home tab, look under “layout”. this will let