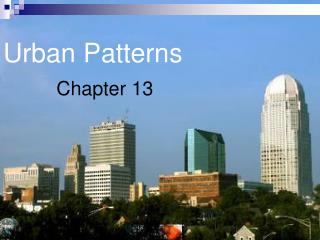 Urban Patterns - Chapter 13. urban patterns. city vs. country. urban geographers are interested in the where question at

Urban Settlement Patterns - . urban settlement. urbanization - the process by which an area changes from being rural to

Chapter 13: Urban Patterns - . the cultural landscape: an introduction to human geography. why do services cluster