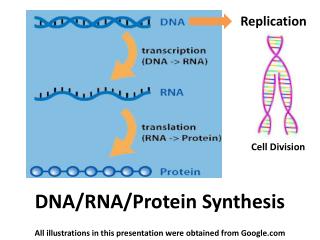 Replication. Cell Division. DNA/RNA/Protein Synthesis. All illustrations in this presentation were obtained from Google.com. DNA Scientists. Who tried to find the genetic material but f ailed ? Instead he found TRANS F ORMATION . DNA / Protein Synthesis - . i. dna structure. made up of 1000s of repeating units (nucleotides) each nucleotide has 3

DNA &amp; Protein Synthesis - . from gene to protein. nucleic acids and protein synthesis. all functions of a cell

DNA &amp; Protein Synthesis - . the student will investigate and understand common mechanisms of inheritance and

DNA, RNA and PROTEIN SYNTHESIS sections 12.3 and 12.4 - . what is protein synthesis? what is the relationship between dna

CH. 12.3 : DNA, RNA, and Protein - . section objectives: relate the concept of the gene to the sequence of nucleotides in