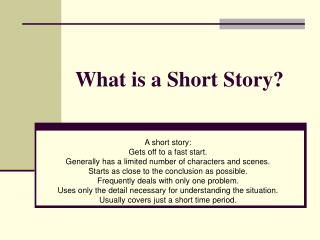 What is a Short Story?. A short story: Gets off to a fast start. Generally has a limited number of characters and scenes. Starts as close to the conclusion as possible. Frequently deals with only one problem. Uses only the detail necessary for understanding the situation. Short Story Literary Analysis - . this is an essay which will analyze the author’s development of theme in a short

AN HOUR WITH ABUELO - . short story with a cd page 591 to 596. characterization. t he way a character is revealed,

Foreshadowing - . take notes on outlined text. foreshadowing. hints in a story about what will happen further on in the

M.S. Dhoni: The Untold Story - This ppt will have the short details of upcoming movie ms dhoni: the untold story which

An Archetypal Story - The hero's journey. an archetypal story. archetype: a pattern, such as a type of character or type