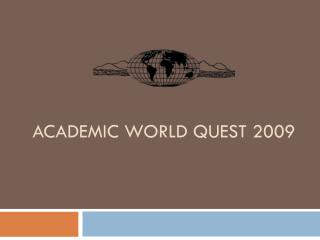 Unicef’s quest to a fairer world - . made by: janne r oovers. who they

World Budopersonality 2009 - This is the price of the best personality within martial arts of 2009. final 5.

The 1990s: An Interconnected World Web Quest - . a global world. as the cold war came to an end and the soviet union

Contributions of the Muslim World WEB-Quest - Directions: use your best internet searching skills to find the answers to

Quest - . quest. what is a webquest? a webquest is an inquiry-oriented activity in which some or all of the information

Quest - . video clip: give me some characteristics of medieval times. this clip is from a knight’s tale. pay attention