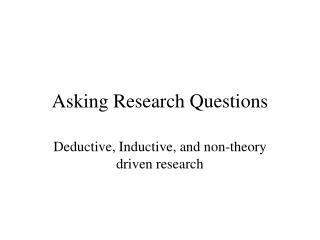 Asking Research Questions. Deductive, Inductive, and non-theory driven research. Some Terminology Page 18 of Course Packet. Independent Variable (IV)-variable that the research intentionally manipulates in order to observe its effect on the DV. Asking Research Questions - . research plan depends on your question it is the point you want to make, to explore, to

Asking Questions - . we will be able to. define ‘awe and wonder’ list the things people can wonder about. explain

Asking better questions Asking questions better - . reflection. why do you ask questions in lessons? what do you think is

Asking Questions - . checklist for the research question. short and direct doable starts with words, why or do it

Asking Questions - . survey design methods and tools. where to begin?. identify your audience who needs the information?

Asking questions - . what is the difference between a short question and a long question?

ASKING QUESTIONS - . guidelines to doing your speaking task grade 5. how do we make ‘wh-’questions?. question word :