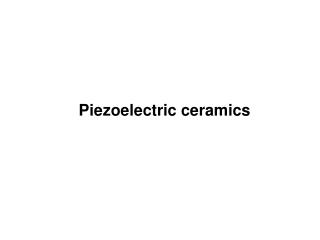 Piezoelectric Effect - . appearance of an electric potential across certain faces of a crystal when it is subjected to

Piezoelectric Microphone - . by : keundra waller and chris burke : ). when the microphone was invented and who invented

Piezoelectric Crystals - . meen 3344 by: matthew kelso. piezoelectric crystals. crystals that generate a voltage when a

Ceramics - Ceramics a wide-ranging group of materials whose ingredients are clays, sand and felspar. clays contain some

Ceramics - . please get out notebook paper and set up cornell notes. clay. a natural material found in the earth. is

Ceramics - . ceramic objects are made with inorganic, non-metallic materials that are heated and then cooled. these

Ceramics - . by mrs. breckenridge. ceramic vocabulary. wedging. before you begin to work with your clay you need to wedge