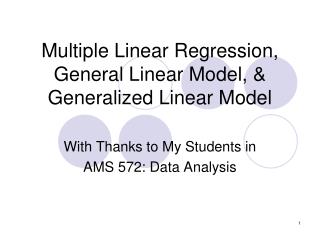 The General Linear Model - . or, what the hell’s going on during estimation?. what we hope to cover: extension of

Chapter 16 - . integrating what you have learned: the general linear model. the relationship among major statistical

Lecture 13: Multiple linear regression - . when and why we use it the general multiple regression model hypothesis

Multiple Regression - . chapter 18. 18.1 introduction. in this chapter we extend the simple linear regression model, and