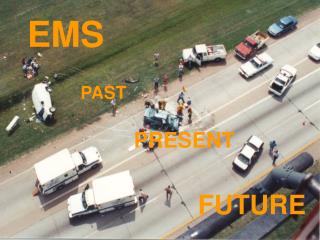 EMS. PAST. PRESENT. FUTURE. EMS PAST. Pioneers of Prehospital Trauma Care. AMBROSE PARE French surgeon in 1500s Wrote first book on trauma care Condemned use of boiling oil for GSW and reintroduced use of ligatures for amputations No organized evacuation of wounded at this time. EMS - . the current state of emergency care in west texas. texas highways. a total of 17,078 square miles (which is

Trinity EMS - Ethical responsibilities. promptly respond to the needs of every patienttreat all patients and their

Calling EMS - . direct line phone usually located on the deck in that is a direct line to 911 phone is usually checked at

Trinity EMS - Suspected tia/cva. prompt notification to the emergency department of the time of onset of symptoms is

EMS COMMAND - What we imagine is order is merely the prevailing form of chaos. kerry thornley , principia discordia, 5th

EMS Systems - . heather davis, ms, nremt-p. about the case study. why is the role of ordinary citizens important in this