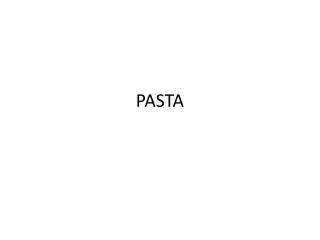 PASTA. Pasta. Made from any of several varieties of durum wheat that thrive in dry climates, pasta has become one of the world's most popular foods. It comes in many different shapes and sizes The basic dough can be combined with other ingredients and sauces PASTA - . learning objectives to list the ingredients used in making pasta to understand the reasoning for pasta shape

Pasta - . history of pasta. popular legend has it that marco polo introduced pasta to italy following his exploration of

Pasta - . that is one spicy meat ball. pasta and noodles. identify at least twelve varieties (shapes) of commercial

Pasta - . main ingredient in pasta is flour , usually wheat flour . most commercial dried pastas are made from semolina

Pasta - . fall 2012. history of pasta. popular legend has it that marco polo introduced pasta to italy following his

Pasta: - . understanding pasta. kinds, characteristics, and quality factors. commercial pasta: made from dough and has

Pasta - . buying, cooking, and nutrition. the basics of pasta. made from flour and water–italian for “paste” durum

PASTA - . intro to foods and nutrition. cooking tips and tricks. how

Pasta - . from a scale of 1-5, rate how much you like pasta?. andrea ung alejandra tejeda jasmine seoane patty tiempos

Pasta - . goodston production. history of pasta. a variation of pasta existed as early as 3000 b.c. in china. rice

pasta salad - Pasta salad is one of the incredible plate of mixed greens which is especially tasty and solid as well.