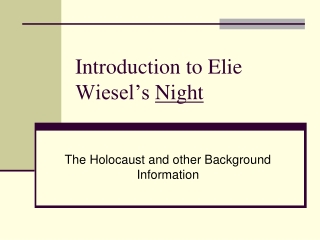 Introduction to Elie Wiesel’s Night. The Holocaust and other Background Information. The Holocaust: Terms to Know. Holocaust: burnt offering; a sacrifice consumed by fire Genocide: The systematic annihilation of a whole people or nation Antisemitism: ~Night~ ~By: Elie Wiesel~ - . niky kmiec and khristen logan. ~the truth about the holocaust!~. what i already knew.

Night By Elie Wiesel - . vocabulary – chapter one hasidic - a branch of orthodox (traditional) judaism that maintains a

NIGHT - . «  i’ve got more faith in hitler than in anyone else. he is the only one who’s kept his promises, all his

Night - . by elie wiesel. bellringer 1/16/14. “it is important to bear witness. important to tell your story… you

Night Themes - . by elie wiesel. death. in the holocaust experience, elie undergoes near physical, spiritual, and

Elie Wiesel - . why do we read

Night by Elie Weissel - . elie ( eliezer ) wiesel is a novelist, journalist and nobel prize winner. he was born an

Welcome Scholars! December 13,2011 - . swbat identify and analyze events of the holocaust that had a direct effect on

The Holocaust : Night by Elie Wiesel - . ms. kinner english 4. how it