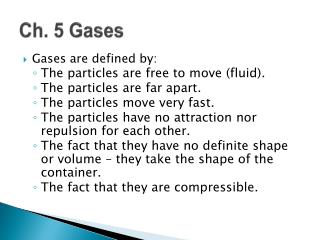 Ch 12 Gases - . properties of gases. unique due to distance between particles gases are fluids(can flow) due to

Ch. 10 Representative Gases - . oxygen  0 2 2 molecules of oxygen what you breathe ozone is a gas as o 3 3 molecules

Chapter 5 Gases - . the structure of a gas. gases are composed of particles that are flying around very fast in their

Chapter 5 Gases - . a gas- uniformly fills any container mixes completely with any other gas can easily be compressed

Section 5 Gases - . gas laws. in the first part of this chapter we will examine the quantitative relationships, or

Chapter 5 Gases - . kim shih ph.d. gases pushing. gas molecules are constantly in motion as they move and strike a