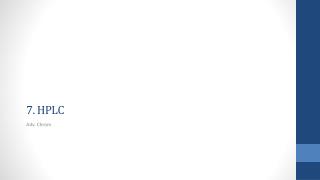 7. HPLC. Adv. Chrom. Revision. 1. The P in HPLC is often used as an abbreviation for pressure. Explain why . pump uses high pressure to form liquid through column 2. Draw a block diagram of the components of a typical HPLC. 3. How does separation by HPLC differ from that by GLC? HPLC - . chromatography. stationary phase may be solid (adsorption) or liquid (partition) mobile phase may be gas (gc) or

Practical HPLC - . in this section, we will discuss:. how to set up an hplc system for a sample injection including:

HPLC Instrumentation - . in this section, we will discuss:. general components of a high performance liquid

Reverse Phase HPLC - . by julian chesterman natalie mckenzie harry zhou. where is it?. why is it there?. final