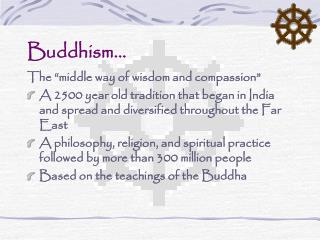 Buddhism…. The “middle way of wisdom and compassion” A 2500 year old tradition that began in India and spread and diversified throughout the Far East A philosophy, religion, and spiritual practice followed by more than 300 million people Based on the teachings of the Buddha. III. CULTURE - . 1. what is still the most popular religion in china since its introduction in the 1st century? .

Buddhism - Dhipa begum downsell primary the buddha and the wounded

Tibetan Buddhism - . the myth and magic of vajrayana. three turnings of the wheel. first turning: in deer park, sarnath

The Tipitaka - . this is the collection of pali language texts, based on the teachings of the buddha, which form the

Shinto - . yasukuni shrine, tokyo -- by en:user:jpatokal. what is shinto?. the “spirit way” (from chinese shen-dao ,

THIS - . is. jeeparty. your. with. host. mr.niese. wwii. cultural / human geography. a little bit of everything. physical