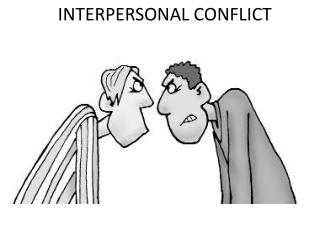 INTERPERSONAL CONFLICT. THE PRISONER’S DILEMMA. A MODEL OF CONFLICT. Goldman ( 1966) presented a cycle of conflict based on; (1) an initiating event , (2) an influencing event , and ( 3) a concluding event . Resolving Interpersonal Conflict - . conflict— an expressed struggle between at least two people who perceive the

Conflict - . conflict. conflict: a struggle between opposing forces characters in conflict form the basis for novels,

Conflict - . what is it and why is it so important?. what is conflict?. how do you define conflict? a conflict is a

Conflict : - . amongst partnerships. erica styles es7871@mun.ca. contents. who and what of conflict and partnership

You Always Hurt the Ones You Love: Strategies and Tactics in Interpersonal Conflict - . mary anne fitzpatrick and jeff