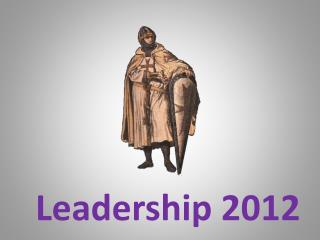 Leadership 2012. My Father was a …. Present – 32 nd degree Mason 1970 – Shriner 1920 – Knight Templar. How’s that working for us? Insanity - Doing the same things but expecting different results CONGREGATIONAL LEADERSHIP CONFERENCE 2012 - . new purposes for old buildings. why talk about this?. every month four

Classified Leadership Institute 2012 - . welcome aboard. celebrating outstanding classified employees from across our

Cultural Leadership Summit 2012 - . changing the game . development of a kpi framework of a

2012 Volunteer Leadership Retreat - . good to the core – volunteers: the core of the community – at the heart of it